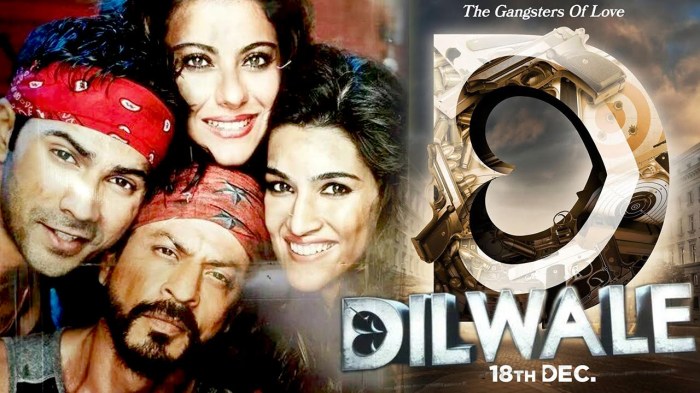 A star is an actor before becoming a star. An actor is subjective while star is just objective towards his audience. After reaching the peak of stardom, some just want to be stars rather than being actors. Film-making turns out to be a business venture. “Shah Rukh Khan” is becoming an example for this scenario. If he gets a partner like “Rohit Shetty” then it’s a perfect business venture. After “Chennai Express”, they both teamed up for new venture “Dilwale”. Kajol, Varun Dhawan and Kriti Sanon have done the lead roles besides SRK. His Red Chillies Entertainment and Rohit’s Rohit Shetty Productions are the investors of this project.

Raj (Shah Rukh Khan) runs a car remodelling garage along with this friends. His brother Veer (Varun Dhawan) falls for Ishitha (Kriti Sanon) which leads Raj to his past where he had a different identity and heart breaking love interest Meera (Kajol). What happens next, forms Dilwale’s rest plot.

Rohit Shetty who is well known for films with action and entertainment like “Golmaal”, “Singham”, “Chennai Express” came up with a decent storyline which had a depressed male lead, an emotional brother and so on. Though the plot is very thin, an intriguing and sensible screenplay could’ve made Dilwale a decent romantic entertainer. But Rohit Shetty couldn’t come out of his core style of film making. He made the best use of rich production values but failed to use the veteran actors and the storyline.

Yes, Dilwale had some good things to talk about. If observed Rohit’s previous films like “Singham”, “Chennai Express”, the action sequences were too unconventional and some were even unacceptable. But this time, he came up with stylish action sequences and he used Khan’s style very much in them. For example, the action sequence which comes after Raj leaves the hospital seriously. The locations of Bulgaria were very beautiful. He has also shot the song “Gerua” on Khan and Kajol which had a perfectly done CG work and colour grading. Some comedy sequences involving Johnny Lever, Sanjay Mishra, Varun Dhawan were entertaining. The song “Janam Janam” had some heart touching visuals. Amar Mohile’s background score helped the film a lot, especially in the scenes between Khan and Kajol.

Rohit had a super hit pair Khan – Kajol as his leads. He just tried to remind the audience of their Dilwale Dulhaniya Le Jayenge (DDLJ) rather than impressing them independently with his Dilwale. He might have forgotten the fact that people never forget DDLJ. No scene between Khan and Kajol was romantic or lovely in the film. More than this, the tribute video for DDLJ which was released a month ago was very lovely. Even the gangster backdrop failed to support the film story wise. It just helped Rohit to tumble the costliest cars like Mustang, Mercedes, Audi and so on. Forget about Veer and Ishitha who could never be remembered once you step out of the theatre.

When you have SRK, you get a lot of space to elevate the melodrama in your film. But Rohit who can elevate the vehicles unnecessary failed to elevate the melodrama. He got many chances to end the film in a right way and in a right time but he came up with a very sluggish screenplay of 154 minutes and he concentrated on ending with action sequences rather than ending it sweetly. Even the SRK’s signature dialogue at the end couldn’t deliver a nice feel over the film.

So, Dilwale is a film which is technically rich but poor in content and execution. Still, it’s very much decent when compared to Rohit-SRK’s previous film “Chennai Express”. It’s much healthier than Chennai Express.

Coming to performances, Khan is the heart of the film (which he always is). He is stupendously stylish in action sequences and handsome as a middle aged garage owner. Kajol was beautiful as usual, especially in the song “Gerua”. A good DI would’ve made her look much younger in the flashback sequence. Varun Dhawan and Kriti Sanon were normal and not to be remembered. After a long time, I watched Johnny Lever on screen and his performance was thoroughly entertaining. Boman Irani, Sanjay Mishra tried to entertain a little.