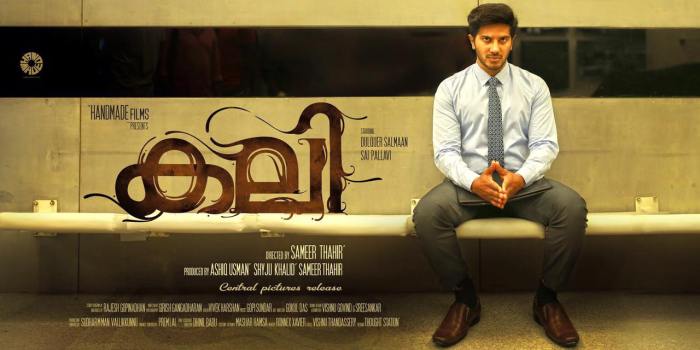 With Mani Ratnam’s “OK Kanmani”, I get to know about “Dulquer Salman”, son of Mammotty. Later I started watching all his previous films like Bangalore Days, Ustad Hotel, Theevram, Charlie and became a fan of his story selection and performance. The same happened with “Sai Pallavi”. Who can’t love her as “Malar” in Premam. When I came to know that these two actors are going to appear together on screen with “Kali” under the direction of “Sameer Thahir”, who worked as cinematographer for Bangalore Days, I had a curiosity to watch it. I started awaiting it seriously once I watched its theatrical trailer. Produced by “Handmade Films” production house by Ashiq Usman, Shyju Khalid and Sameer Thahir, “Kali” was released on 26th of this March.

It’s the story of Siddharth (Dulquer) who is short tempered and makes a mess out of even smaller things and his wife Anjali (Sai Pallavi) who tries to bear his arrogance and control his anger all the time.

The trailer gave an impression that this is going to be a comedy romantic drama but the opening scene of the film showed it’s going to be somewhat different from regular comedy drama. One wouldn’t understand why this sequence was included in the narration but director Sameer used it in the latter part of narration. The background score given by Gopi Sundar during the titles was highly powerful and changed the opinion given by trailer completely. Director Sameer established the main characters Siddhu and Anjali faster and well too. I liked the establishment of Siddhu with a college mob fight and the relationship between Siddhu and Anjali with feel good romantic scenes.

Most of the first half runs on Siddhu’s arrogance for even smaller things and most of them gained some laughs from the auditorium. I just loved the song “Vaarthinkalee” soulfully sung by “Divya S. Menon” which also showed a fantastic chemistry among the lead pair. This made me feel this film has a potential to reach Dulquer’s “Charlie” but there came a diversion. The narration changed its path with the intermission scene.

Coming to the second half, the narration turned 180 degrees from being romantic and arrogant to a thriller one when Siddhu and Anjali halted at a highway restaurant for dinner. Producers are benefited as the entire second half happens in a single place without any songs in between which doesn’t let the lead pair change their costumes even. Director succeeded in creating a suspense among his audience regarding what is going to happen next but to what extent? He didn’t have this query in his mind. Every audience can feel the cruelty of the restaurant owner (Vinayakan) and the truck driver (Chemban Vinod Jose) but showing it for a longer time really increased the audience’s arrogance towards them as well as towards the director. Had he trimmed that cruelty a bit, hence trimming the whole film by 20 minutes this film would have delivered at least a good impression.

On the whole, Kali is a highly misguiding film for those who loved the trailer and awaited the film, like me. You can really enjoy the first half but a dragging cruel second half can test your patience levels.

Dulquer, as usual lived the role with his arrogant expressions. His manly diction increased his role’s eminence. Sai Pallavi was cute and apt for her role. I liked her controlling emotions when Siddhu makes a mess in a dinner party. Soubin Shahir got a role which is crossed by most of us in our daily lives. Chemban Vinod Jose as truck driver was apt for the role and more cruel as well. Vinayakan as restaurant owner was very rough.