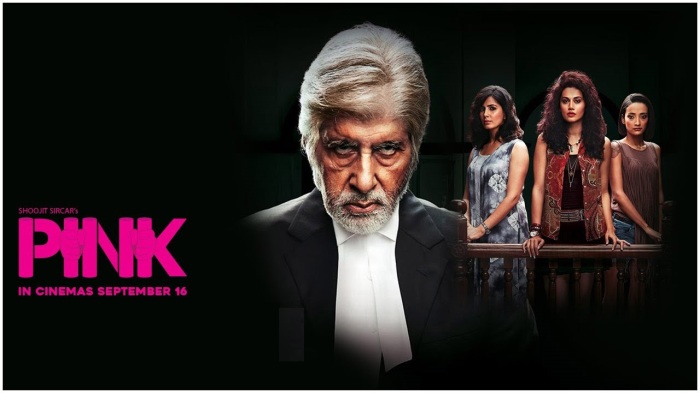 A problem can have multiple solutions and each solution has its own dimension. “Shoojit Sarcar” came up with his own solution for how to avoid molestation of girls in his film “Pink“. Directed by “Aniruddha Roy Chowdhury”, this film stars Amitab Bachchan, Taapsee Pannu, Kriti Kulhari and Andrea Tariang in lead roles. It was produced by Shoojit Sarcar and Rashmi Sharma.

Three independent working girls Minal Arora (Taapsee), Falak Ali (Kriti) and Andrea (Andrea) get accused for an attempted murder of Rajveer Singh (Angad Bedi). Deepak Sehgal (Amitab Bachchan), a retired lawyer suffering from a bipolar disorder comes forward for defence. Why the girls were accused? How Sehgal tried to prove that they are not guilty? form the plot points.

In general, these kinds of films come up with an objective narration but director Aniruddha Roy came up with a subjective narration stating that girls aren’t guilty, since the beginning of the film. The most impressive thing in this narration was, director never narrated what had actually happened at the crime scene visually until the end but successfully injected the effect of the same into his audience. Also, the narration was in such a way that there was no chance for the audience to step out of the narration to check out his mobile phone or talk to his peers. There lies the narrator’s victory.

There was a very good detailing like Sehgal wearing a mask while going out which states that Delhi is the most polluted city. Recording even the breathing sounds of Sehgal was an impressive point of detailing.

The narration kicks off slowly but it is not boring as the problem of the girls gets established through every scene phase. It felt like a Hollywood film when Sehgal knocks the door in a lawyer suit where “Shantanu Moitra” provided enough elevation with his outstanding background score.

A writer actually wins when his story is felt rather than being liked. This plot had lots of such points like Andrea explaining how she is humiliated for being a North Eastern girl. A good narration always needs a good actor and Bachchan was the right choice for Sehgal. Take the scene where he cross examines Sarla Premchand (Mamta Malik) followed by the artistic shot of him removing the glasses. The rules Sehgal dictates for the “women safety manual” started funny but it became heart touching when he comes to “Rule no. 4“. Sehgal justifying it by saying “boys should be saved” rather than “girls” was an outstanding plot point.

The climax sequence was also heart touching where Bachchan shined again. The last artistic shot where the three girls were shown enjoying the sunrise speaks a lot of things by proving Rule no. 4 and the poem during end titles in Bachchan’s voice delivers a satisfaction that you’ve watched a good film.

After watching this film, I had quite number of assumptions for why it has been titled “PINK“. It may be because it’s the girl’s colour as everyone blindly believes or it may be the obscene meaning given by American culture or anything but the director tells you to respect every meaning. That’s a great thing.

On the whole, Pink was an amazingly written and outstandingly made thought provoking film on which I feel like writing a lot but refraining myself for the audiences who haven’t watched it yet. I recommend this film to not just movie lovers but movie haters too. Once you start watching, you don’t like the film. You’ll feel the film. Just go for it!!

No need to say anything about Bachchan because he is the best choice to take this film a step higher. The three girls Taapsee, Kriti and Andrea who performed in such a way that they really got indulged in that case. A special mention is deserved by Piyush Mishra, the prosecutor because as long as you’re in the auditorium, you keep hating him. That’s his acting prowess. Remaining cast like Angad Bedi, Raashul Tandon, Tushar Pandey, Vijay Verma and all were apt for their roles.